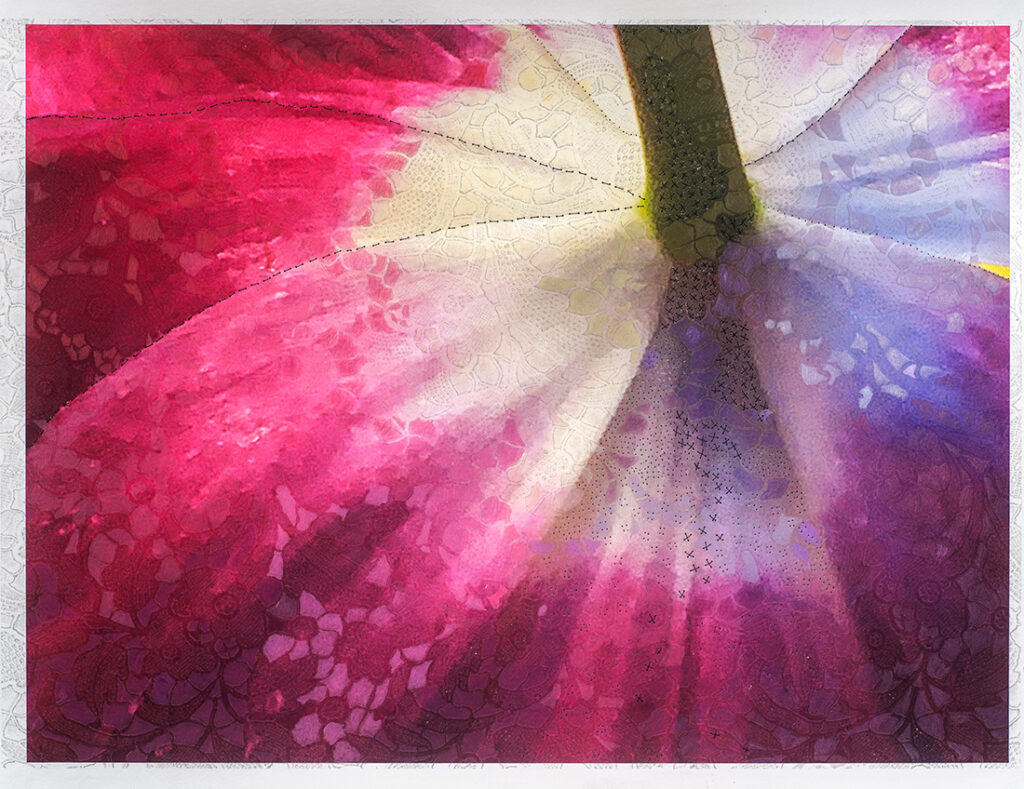 On a warm spring day a few years ago, I met the members of Salon Jane en masse. I had known them as individuals, having shown some of them at RayKo Photo Center during my tenure there, having seen the work of others in exhibitions around California. I didn’t know though that they had joined forces to spur each other on and inspire each other, ignite each other.

On this day in Carmel Valley, they laid out their work. I could see it then, the strength of their individual visions multiplied by their joining together. Susan Hyde Greene had a collection of stitched pieces with tones of the darkest blues, shattered images brought back together with thread. And something else: the desire for wholeness. I’d see then, two years later, in the depth of the pandemic, that she would take these beginnings, these methods of resolution, and bring out beauty in a horrific time. Taking photographs of flowers and meticulously sewing them, coloring them with the sheen of many pencils of various shades, overlaying lace, obliterating shadow, reminding us that there is strength in beauty.

And then there is Robin Robinson, whose work I carried at RayKo, her images of the seeming emergence from the sea, above water at last, these liminal images perched on the threshold between the past and the present. When I hold these sublime lith prints, I feel the moment when she breaks the surface and we emerge from the deepest water to the unknown of the land and the light. It’s unsettling, but alluring, a push-pull, a giving in, but not a giving up.

That day, I also got to peer into Jane Olin’s darkroom where magic happens. Her gelatin silver prints of trees, manipulated and altered with chemistry and light, reveal a fearless approach to printmaking, unorthodox, exciting, and electric. I saw the small prints in that spring meeting, but now we all get to see what came next: the large pigment prints from those unique silver prints, an entirely different forest and realm to be discovered and experienced.

Martha Casanave, whom I had met more than a decade ago at Rayko,  has been in the darkroom too, creating silver gelatin chemigrams, abstract images that have a voice and rhythm all their own. Out of the darkroom also come images, using a 19th century printing process, depicting the life of a family of crows seen from her window.  The pairing of these two groups of analog images is  experimental, dynamic, and brave. That day in Carmel Valley she also had her four published books. She didn’t say much but she didn’t need to; her work resonated.

That day too, I held Anna Rheim’s books, not just volumes with pictures and words but windows into her world. These books were invitations into her personal story, a journey embedded in family dynamics and suffused with hope. It is not often that you are handed a secret like a diary with a key, but Anna’s books are that kind of gift.

Robin Ward’s work veers away from the others in the group. Embracing the latest technology, including video and augmented reality, she has taken a bold turn. I knew that day in the valley when she couldn’t be there, but instead appeared on a screen (well before the pandemic made virtual appearances the norm), that she was an innovator. The work she has created in this strangest of all our years is a departure from reality, and what could we need more at this moment in time?

I am honored to be able to exhibit the work of these six talented photographers whose alliance brings us these diverse and powerful projects. The artists of Salon Jane have risen to the challenge of creating images and expressing their ideas in a time when paralysis is easier than almost anything else. Their most recent exhibition, Present Tense, is not just a culmination of all those ideas that I saw laid out before me in that spring that seems like a lifetime ago, it is a triumph as well.

Use your mouse to scroll for more! P.S. This is a custom message ;)
Okay